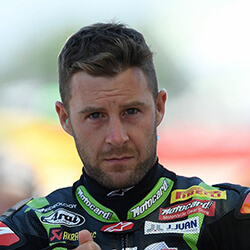 Jonathan Rea has finished the Misano double and advanced to within 16 points of World Superbike leader Alvaro Bautista after winning the final race of the event. The reigning champion from Northern Ireland claimed the first race of the day, but ultimately had to settle for fifth place after Bautista took the win for the sprint race.

Bautista slid off while in front of the group during the final race, a gap that was quickly taken over by Rea with just four laps left. Rea hold off a challenge from Toprak Razgatlioglu to claim the win. It would prove important for the title event as Rea earned 23 points on the Spanish rider who remounted to finish the event in 14th place. Talking bout his win, Rea stated that it he was very happy and that it was an important race.

Bautista came off of the second lap and opened the door for Rea, who then slid behind Razgatlioglu before he slowly edged to the front of the group. Leon Haslam made it to the podium, followed by Alex Lowes, Tom Sykes, and Michael Ruben Rinaldi. Earlier on the day, Rea had recovered from a small accident to finish in fifth place as Bautista moved on to win the sprint race.

Rea led the event for a long while before Bautista moved in front during lap three Lowes finished in second place, followed not long after by Haslam, who ended the day by crossing the line in third place overall.