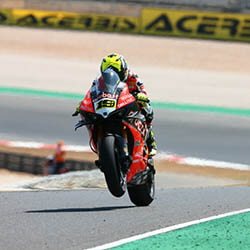 In the Portugal World Superbike Championship round, Series champion Jonathan Rea was refused a treble victory as Spanish competitor Alvaro Bautista won race two of the event. Having won the 20-lap opener on Saturday and the Superpole sprint race on Sunday, Rea came in second behind his closest challenger but remains 91 points in the lead.

Bautista produced a bad start from second on the line but fought back to take win by 0.11 seconds. It was the 15th win of the year for the Ducati rider, four more than Rea’s total. Rea took the checked flag earlier in the day in Portimao’s 10-lap sprint race, winning two seconds from Bautista who blasted the field to take the runner-up spot. That start-to-finish victory was on the Portuguese circuit for Kawasaki cyclist Rea’s 11th of the season and his fifth in a row. In 2018, 2017 and 2015, the 32-year-old won pairs as well as a one-time victory in 2014.

Englishman Alex Lowes finished third on the line on a Yamaha, with Toprak Razgatlioglu ending third in the weekend’s final race. Rea has won eight of the last 10 World Superbike races, including both race and sprint events, chasing a record fifth successive title. In the last round at Laguna Seca in mid-July, Bautista, dealing with a knee injury, worked his way up the arena to receive nine wins on Sunday night before taking the win for the final race of the event.