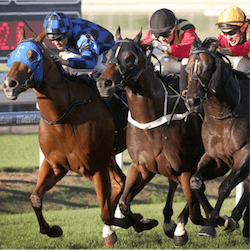 In a switch that saw the BTC Cup renamed the Darley Kingsford-Smith Cup and shifted to the end of May, the Doomben 10,000 has been moved to 13 May to accommodate the change. Both races are likely to attract a strong field of sprinters, but the rescheduling means that the Doomben 10,000 is now the first major Group 1 sprint in the Queensland Winter Racing Carnival.

The original list of 40+ nominees will be substantially reduced by the time the final field is announced, but Australian betting enthusiasts can still expect several top sprinters fighting it out on the final card. The 10,000 generally has a fairly large field anyway, and Doomben’s tight turns make a horse’s barrier draw significant, so the odds may change again once that draw is announced. At present, however, there are two stand-outs in the ante-post betting.

Russian Revolution, a 3-year-old colt trained by Peter and Paul Snowden, is the $3.80 ante-post favourite for the 10,000. He has been developing a fine reputation as a sprinter since his winning debut in the Schweppes Maiden Handicap at Canterbury in June last year, and his career record sits at an impressive 7: 5-0-0.

The 2016 Doomben 10,000 was won by 5-year-old gelding Music Magnate, and he is back this year seeking a double. Bookies are offering him at $7.00. Fell Swoop, another 5-year-old gelding, is being offered at the same price, coming off a third place in Randwick’s TJ Smith Stakes last month. Redzel and Voodoo Lad, both at $9.00, are the only other horses being offered at less than $10.00.