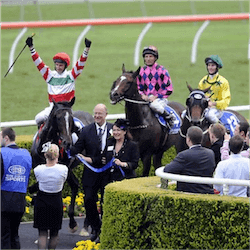 This coming Saturday will see first of two top level Group 1 races take place at Randwick Race Course. The All Aged Stakes forms part of the betting frenzy that is the Sydney Autumn Racing Carnival. Preceded by the two Championships meetings, the All Aged Stakes Day is headlined by the Group 1 Champaign Stakes for two-year-olds as well as the main All Aged Stakes race.

The race offers a total prize money of $600,000 where the winner takes out an impressive $360,000 for connections. The All Aged Stakes is a classic weight-for-Age race over a distance of 1400 meters. The middle-distance sprint has no lead up races that offer ballot exemption. As such, punters must look to the lead-up races where past winners have come through. The Sydney autumn features have usually served as the best guide for the race.

The 2017 All Aged Stakes will take place this Saturday the 15th of April. The betting markets for the race are usually led by horses who have come off a top finish in a Group 1 Sydney race during the autumn carnival. To put this into perspective, between 2004 and 2016, only three All Aged Stakes winners ran worse that second place in their lead up run. This list includes English who won the race in 2015 after running third in the TJ Smith Stakes as well as Dissident who won it in 2015 after running third at Caulfield in late February.

A Good Record for Favourites

Favourites at the All Age Stakes have enjoyed an excellent record at Randwick. Of the 11 winners from 2006 to 2016, six of them have jumped as the punters pick. We would have to look all the way back to 2001 to find a double figure winner when El Miranda won the race sitting at odds of $31. The horse scored a major upset pipping race favourite Sunline who won in 2000 and again in 2002.

Recently it seems three-year-olds have picked up a good strike rate. Two of the five winners from 2012 to 2016 have been in the age group while mares hold a good record of six wins since 2000. For the fillies, Atlantic Jewel got the job done in 2012 while English saluted as a three-year-old filly in 2016.