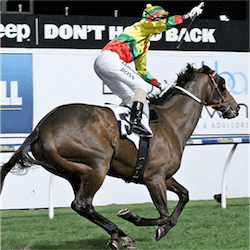 Moonee Valley Racing Club, one of Melbourne’s three historic horseracing clubs founded in the 19th Century, has always used innovation to compete against its older rivals, the Victoria Racing Club and Melbourne Racing Club. In 1922, for example, Moonee Valley introduced what would become Australia’s premier weight-for-age race, the WS Cox Plate. Since 1998, Moonee Valley Racecourse has had another unique draw-card setting it apart from Melbourne’s other racetracks: night racing under floodlights.

These are most often Friday night affairs, attracting a festive crowd of punters gearing up for the weekend. However, Wednesday, March 22 is a special occasion in the autumn racing season: the annual running of Moonee Valley’s most prestigious night race, the 1,200m William Reid Stakes. It’s a Group 1 weight-for-age race first run in 1925, and the $500,000 purse attracts some of the top sprinters three years old or older competing in Australia.

As the last feature race of the Melbourne season before the annual racing action shifts to Sydney, with a restricted field of 14 or fewer galloping full-tilt around the tight Moonee Valley turns, the William Reid Stakes has plenty to offer betting enthusiasts. Legendary gelding Manikato is the undisputed king of the race, taking five consecutive wins from 1979 to 1983.

We will only know the final field and draw for the 2017 William Reid Stakes on race day, so it is too early to hand out any hot tips. The 2016 winner, Flamberge, went on to another profitable season last year, so if the 7-year-old gelding is on the card this year, he’ll see some heavy betting.

However, another horse in the running may be 5-year-old Fell Swoop, another gelding who lost the 2016 Oakleigh Plate by the shortest of noses to Flamberge. He’s also been in peak form over his last few starts, but it remains to be seen what races trainer Matt Dale will be entering him for in autumn.

Favourites have had a good record in the William Reid Stakes over the past few years, so punters may want to keep that in mind as the field is finalised. But as Turffontein proved in 2010 and Foxwedge demonstrated again in 2012, $11.00 outsiders can also deliver a surprise win.