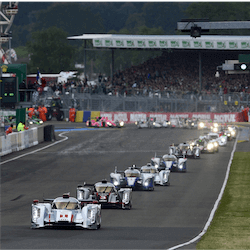 It’s a big weekend for fans of endurance motorsport, with the iconic 24 Hours of Le Mans scheduled on Saturday and Sunday at Circuit de la Sarthe. It’s the third round of the 2017 FIA World Endurance Championship, and Toyota, with three TS050 Hybrids in the LMP1 category, is the favourite in current betting.

The Japanese outfit is leading both the manufacturers’ and the drivers’ championships, thanks to wins by the team of Anthony Davidson, Sebastien Buemi and Kazuki Nakajima in the first two endurance events of the 2017 WEC: the 6 Hours of Silverstone in April and the 6 Hours of Spa-Francorchamps in May.

Porsche Eager to Challenge in LMP1

Although Davidson, Buemi and Nakajima top the drivers’ ladder with 50 points each, both of Porsche’s LMP1 teams are still in contention in their Porsche 919 Hybrids. German Timo Bernhard and New Zealanders Earl Bamber and Brendon Hartley finished second at Silverstone and third at Spa, leaving them on 33 points, only 17 behind their Toyota rivals.

Neel Jani, Nick Tandy and Andre Lotterer are driving the other 919 Hybrid, and they took third at Silverstone and fourth at Spa. They’re on 28 points each, so they must have hopes of leapfrogging their Porsche teammates, at least, at Le Mans.

However, before they can count their chickens, the Porsche crews will need to neutralise Toyota’s one undisputed advantage: speed. The TS050 Hybrids have shown blistering pace so far this season, and at tests on the Circuit de la Sarthe at the start of the month, the Toyota cars posted the top three times. Even Porsche insiders admit they can’t touch the TS050s for speed.

But Le Mans is about team and equipment reliability over a full day as much as it is about speed, and that’s where the Porsche crews may make up the deficit. Although the 919 Hybrids are relatively old, compared to Toyota’s recently upgraded engines, Porsche has so far been focusing on maintaining race pace and keeping their cars running smoothly. The quality of its driving teams and the efficiency of its pit crews could give the German manufacturer the edge.