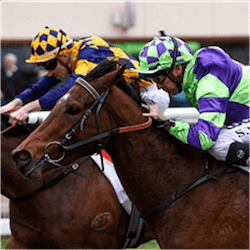 Caulfield hosts the first group races of the 2017-18 season for 3-year-olds on Saturday, 19 August, to kick off the Melbourne course’s annual PB Lawrence Stakes Day. The first race on the day’s card is the 1100m Vain Stakes for colts and geldings, followed by the 1100m Quezette Stakes for fillies.

The Group 3 Quezette Stakes has been run at Caulfield since 1992. It now carries a purse of $150,000, and it’s a sprint that gives betting enthusiasts a chance to see how the top-performing debutantes from the previous season are shaping up for the long haul.

Undefeated Shoals May Be an Attractive Prospect

The field for the 2017 Quezette Stakes will only be finalised on Wednesday, and Lee Freedman has not yet decided if Shoals will be returning from a spell, or taking another week of trials. If the Hall of Fame trainer does decide she’s ready for the Quezette, she will be worth backing.

The 3-year-old filly is undefeated in her maiden season, in three starts since February: over 1100m at the Mangalore Park Maiden Plate at Seymour, the 1200m Group 3 Thoroughbred Breeders Stakes at Flemington, and significantly, in wet, heavy going over 1200m again at Randwick’s Group 2 Percy Sykes Stakes in April.

Crown Witness, trained by Stuart Webb, has only just turned three, after a winning debut as a 2-year-old over 1000m in the Clanbrooke Racing Handicap at Sandown in July. She maintained her undefeated record in her second race, also over 1000m, at Flemington’s Winter Lodge Handicap last Saturday. Webb believes she’s ready for a slightly longer sprint, and the Quezette will most likely be her first stakes race.

Catchy is another filly punters should consider for the Quezette. Ridden by Craig Williams, she’s raced five times and has four wins to her name, including her winning debut in the 1000m William Hill Plate at Moonee Valley in December. The Hayes/Dabernig-trained 3-year-old has won twice over 1100m at Caulfield, and she also took her first Group 1 win there, at the 1200m Blue Diamond Stakes in February.

Her last Group 1 outing, the 1200m Golden Slipper at Rosehill, saw her finish last, but it was also her first race on heavy going. If the track is firm and she once again has Craig Williams in the saddle, she could be a strong challenger in the Quezette Stakes.