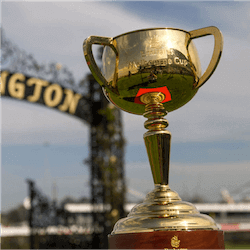 They call the Melbourne Cup ‘the race that stops a nation’, but the miracle of technology means that punters can multitask these days. So on Tuesday afternoon, the iconic 156-year-old two-miler may not exactly stop the nation; it’ll more likely cause a marked drop in productivity, as everyone suddenly develops an interest in office TVs and their mobile devices.

With a purse of $6.2-million, the 3200m Group 1 handicap certainly has the wherewithal to attract a top field, although the final 24 acceptances will only be confirmed after the results of the VRC Cup weekend’s racing are in. The race is generating great excitement among Melbourne race-goers eager to rub shoulders with legendary retired British jockey Lester Piggot, who will be at Flemington on Tuesday.

The favourite, with the final field undecided, is 8-year-old German gelding Almandin, trained by Robert Hickmott. He won’t be ridden by regular jockey Damien Oliver, however. Oliver is under a 20-race ban after he rode Happy Clapper into Royal Symphony several times in the Cox Plate.

Instead, veteran British jockey Frankie Dettori will be in the stirrups for Almandin’s Melbourne Cup challenge. In a 27-year career, Dettori has won some iconic races all over the world, but since his first attempt in 1993, the Melbourne Cup has always eluded him.

Oliver’s axing might be the sign punters have been waiting for that Dettori’s losing streak at the Cup is over. With Almandin offered in ante post betting at $6.50, this year’s race could offer him his best shot yet.

Marmelo and Humidor Attracting Betting Too

The second favourite on Tuesday is British horse Marmelo, at $8.00. The 5-year-old entire is jumping off for the second time in Australia, after a nine-week spell following his August win over 3000m at Deauville. He finished sixth of 17 over 2400m in the Gr. 1 Caulfield Cup on 21 October.

New Zealand gelding Humidor, sired by Ireland’s Teofilo, is third favourite for the Melbourne Cup, after coming back from a three-week spell and finishing third of seven, fifth of 17 and second of eight in October. The 5-year-old is at $8.50 in Cup betting, with no other prospects offered at below $10.00.