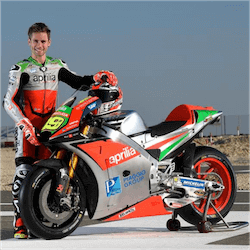 As pre-season MotoGP testing gets underway at the Losail track in Qatar, in preparation for the opening race of the 2018 season, Italian racing team Aprilia has a problem. They were meant to be testing their latest-specification engine on the Qatar track ahead of the season, but it hasn’t arrived yet.

This means that the optimised version of last year, including some tweaked internal parts, may only get some superficial testing before the Gulf Oil Motorcycle Grand Prix of Qatar on March 18, or perhaps even no testing at all.

So rider Aleix Espargaro, who was plagued by unreliable performance from his power unit during the 2017 MotoGP season, finishing 15th, could well be testing the new Aprilia unit in the actual race. It’s not a prospect that will fill him with confidence at this stage.

At least he’s fully aware what the problem is – not the electronics, he told reporters, which have been tweaked several times; it was simply a matter of torque. The new engine will supposedly deliver more grunt, although Espargaro is hoping “by the Qatar race we will be more ready”, presumably meaning he wants to slip in some testing before the race, come hell or high water.

Vinales Looking For a Good Start

The defending champion at MotoGP Qatar will be another Spaniard, Maverick Vinales, and he’ll be hoping to start his season on a high again. He’ll also want to continue in better form than he did last year; his season-opening win was one of only three out of 18 for the year, although the Yamaha rider finished third overall on the ladder.

Last year’s MotoGP champion and his runner-up, Honda’s Marc Marquez and Ducati’s Andrea Dovizioso, will also be strong contenders at MotoGP Qatar on March 18. In the 2017 season, Marquez only took his first win in the third race, the Motorcycle Grand Prix of the Americas in the US, while Dovizioso didn’t get a win until MotoGP Italia in race six. They’ll both want to start the season stronger.

Then there’s also Ducati’s Jorge Lorenzo, who won MotoGP Qatar back in 2016. He finished 11th last year and was seventh on the ladder at the end of the season, so he’ll be eager to come out on top again.