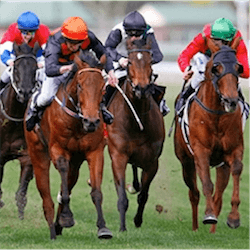 Happily for online betting enthusiasts, Australia’s horseracing seasons are fairly permeable. As winter racing draws to a close, the Spring Racing Carnivals are already gearing up in Melbourne and Sydney, and punters have plenty of betting options in August.

The 2017-18 season’s group racing calendar in Victoria starts next week, on Saturday, 12 August, with Aurie’s Star Handicap Day at Flemington. The titular race is the 1200m Group 3 Aurie’s Star Handicap, for 3-year-olds and older, run down the Flemington straight course. It attracts a mixture of gallopers coming off a successful winter, and horses returning after a spell for the new season, so it’s a useful indicator of sprinters to watch in the coming year.

Last year, the $150,000 Aurie’s Star was won by Sooboog, trained by Darren Weir and ridden by Michael Dee. Aided by a lowest weight of 54kg, the second favourite at $5.50 overcame a draw at Barrier 9 to leave $4.20 favourite Ruetigger in fourth and beat Dibayani by almost two lengths.

Weir announced Sooboog’s retirement to stud in May this year, so the 5-year-old stallion will not be back to defend his Aurie’s Star crown. Racing fans will only know the final field next week, at which point betting options will become clearer. Then, or even before, you can get your bets in online at Luxbet.

‘We’ve Got This’ May Have This

When the field for the Aurie’s Star is confirmed, and betting odds become available, punters may want to take a close look at We’ve Got This. The 6-year-old gelding had a disappointing 2016-17 season, with his best finish a second at Flemington in the Group 2 Gilgai Stakes last October.

However, he has delivered four wins, five seconds and two thirds in his 18-race career, and he is particularly strong at 1200m on the Flemington straight course, with one first, two seconds and a third from five races. He has been rested since November 2016, so trainer Greg Eurell and jockey Craig Newitt reckon he’ll be a serious contender next Saturday.