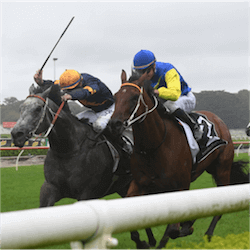 Early Favourites for All Age Stakes

This coming Saturday could be Darren Weir’s chance to for a maiden Sydney Group 1 win, as long as the weather plays along. With Black Heart Bart sitting as the race favourite for Saturday’s All Aged Stakes, Weir has a real chance to claim his first Sydney victory as long as the track isn’t too wet. Weir expressed his interest in bringing the six-year-old through to Randwick to compete in the $600,000 feature race. However, he has said that it all depends on the weather and condition of the track.

Randwick racetrack was upgraded to a soft seven on the weekend; however, rain is predicted for every day this week. This doesn’t bode well for weir. He is reluctant to run Black Heart Bart on a wet track. Speaking to the press, Weir staid that Black Heart Bart was not a wet tracker and will make an appearance if the conditions are right. Weir made headlines when he claimed his first Sydney Winner with Big Duke at the Manion Cup on Protest.

Big Duke also promised to give Weir his first Group 1 win at Saturday’s Sydney Cup before the feature was called off mid-way through the race. Black Heart Bart is a five-time Group 1 winner picking up a win at the Futurity and the CF Orr stakes in both of his last two starts. Weir is hoping he can break the stables’ Sydney Group 1 duck by winning the All Age Stakes this weekend.

Weir confirmed that Black Heart Bart was in great shape but is uncertain of his plans beyond Saturday’s race. Weir said that they might head to Brisbane or Adelaide. If the track stays firm for the weekend, Black Heart Bart could face up against some stiff competition in the form of English, Redkirk Warrior, Le Romain, Jungle Edge, McCreery and Tivaci.

For trainer David Hayes, Redkirk Warrior is in the same boat as Black Heart Bart. Hays confirmed that Redkirk Warrior will only take part in the All Aged Stake if the track stays firm. Chautauqua, the TJ Smith Stakes hero, will not be at the race after Team Hawkes opted to sell the Sprinter.