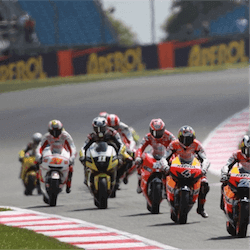 Sunday’s British MotoGP at Silverstone, the 12th in the 18-race 2017 MotoGP world championship, will have plenty to entertain Australian online betting fans, especially those following the Honda-Ducati rivalry at the top of the drivers’ ladder. Marc Marquez, driving for Repsol Honda, is currently top of the table on 174 points, and the odds-on favourite to take the championship outright.

Marquez is also the favourite to win at Silverstone on Sunday, at around $2.75. However, the Spaniard was denied a win in his last race, the Austrian Motorcycle Grand Prix on 13 August, by Team Ducati’s Andrea Dovizioso.

Dovizioso’s win in Austria closed the gap between him and Marquez to 16 points, so he will be going hard at Silverstone to shorten the Spaniard’s lead even further, in his quest to snatch away the drivers’ championship. The Italian rider’s three wins this season bring him to top-of-the-podium par with Marquez, who finished second in Austria.

Betting sites are currently offering around $5.00 on Dovizioso winning the championship outright, and around $10.00 on him winning at Silverstone. But there are two Yamaha riders challenging both him and Marquez, and they could press hard at the British MotoGP.

For Sunday’s race, Movistar Yamaha’s Maverick Vinales and Valentino Rossi, at around $4.50 and $5.00 respectively, could be worth backing. Rossi holds the record for the most British MotoGP titles won, with six at MotoGP level, and two more in the 250cc and 125cc categories. He last won the British race in 2015, after its 2010 move back to Silverstone, so he is a proven contender on the track.

Rossi is currently fourth on the ladder with 141 points, behind teammate Vinales in third, on 150. Vinales, who also has three wins under his belt so far this season, could be in contention for the overall championship too. The Spaniard is second-favourite in the outright futures odds between Marquez and Divizioso, at $4.00 and up. Rossi is a less likely prospect to become the 2017 champion, at around $10.00.