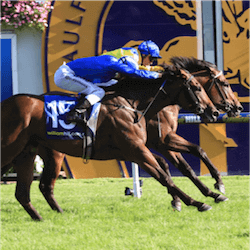 Melbourne’s racing season is embarking on its annual Autumn Carnival, and Australian betting fans have a number of race days to enjoy at the Melbourne tracks before March, when the focus of autumn racing shifts to Sydney. Blue Diamond Stakes Day at Caulfield on February 25 is a meeting that keen punters shouldn’t miss, with three Group 1 races that always attract heavy betting action.

The foremost of these is naturally the sprint from which the day gets its name: the 1,200m Blue Diamond Stakes. Run since 1971, the set-weights handicap is Australia’s richest for two-year-olds, with a purse now totalling $1,5-million. It forms the centrepiece of a family fun day at Caulfield, replete with picnics, barbeques and other entertainment options alongside the racing.

Because the Blue Diamond Stakes is restricted to two-year-olds, many punters find it a reliable race at which to identify champion sprinters of the future. It is also a handy guide to form in the 1,200m Todman Stakes, the Group 2 race at Randwick, Sydney, scheduled this year for March 04.

The fastest race on Blue Diamond Stakes Day is the $500,000 Oakleigh Plate. It’s a handicap open to 3-year-olds and older, and it is only 1,100m longs: so punters are treated to a super-charged gallop at full tilt down two Caulfield straights, with a long run out of the chute into just one turn.

This means the barrier draw is less of a factor in the outcome – outsider Flamberge overcame a Barrier 15 draw and a top-weight of 58kg last year to win the race. Punters should not let a bad Oakleigh Plate barrier draw put them off a fancied sprinter.

The longest of the punters’ three Group 1 options on Blue Diamond Stakes Day is the 1,400m weight-for-age Futurity Stakes, also open to 3-year-olds and older and carrying a $500,000 purse. In the past 17 years, it has been won by the favourite nine times, and on only four occasions has the favourite failed to place.

The 2016 Futurity Stakes winner, New Zealand stallion Turn Me Loose, will be back to defend the title on February 25. However, gelding He’s Our Rokkii is another New Zealand horse that could present a strong challenge, as he has a proud record at Caulfield.