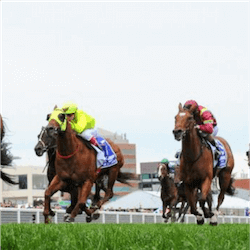 Jockey Craig Williams had a choice of five mounts for Saturday’s $1.5 million Ladbrokes Blue Diamond Stakes at Caulfield, but opted for Robert Crabtree’s Catchy. It proved a wise choice; the filly triumphed over an unfavourable barrier draw of 11 and a strong headwind to win the sprint, netting trainer David Hayes his fifth Blue Diamond victory.

At $4.80, Catchy started as second favourite in the 1200m Group 1 race for two-year-olds. The favourite was Pariah at $4.00, but Catchy came from 12th place to overhaul the colt by half a length at the finish line. Formality, another filly that was originally among Williams’ choice of mounts, ran third.

The 1400m Group 1 weight-for-age Italktravel Futurity Stakes, with a purse of $500,000, was run immediately prior to the Blue Diamond Stakes on Saturday.

Favourite at $1.90, Black Heart Bart, a 6-year-old gelding trained by Darren Weir and ridden by Brad Rawiller, made a late challenge from fifth to beat race leader and $17.00 outsider Tosen Stardom by a nose. This brings his Group 1 win tally to five; including the CF Orr Stakes two weeks earlier at Caulfield.

Tosen Stardom, a Japanese 6-year-old entire ridden by Williams, is also trained by Weir, and paid $4.00 for a place bet. Ecuador, the 7-year-old gelding trained by Gai Waterhouse and Adrian Bott, started at $10.00 for a win, but ran third for $2.10.

The penultimate race of the Blue Diamond Stakes Day, the prestigious $500,000 Oakleigh Plate over 1100m, proved a disappointment for 3-year-old favourite Extreme Choice, who started at $3.80. The colt finished third, after 5-year-old mare Sheidel led from the start, and gave the training team of David and B Hayes and T Dabernig their second Group 1 win of the day.

Third favourite at $8.00 after fourth-placed Hellbent at $6.00, Sheidel only relinquished the lead for a moment on the race’s single turn, jostling for position with stablemate Faatinah. The 4-year-old gelding was a rank outsider at $41.00 and almost caused a huge upset, but Sheidel quickly reasserted her dominance, and Faatinah finished second by a length.