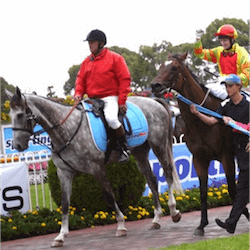 Australian summer racing is in full swing, so there is plenty of action available every week for online sports betting fans. A meeting punters won’t want to miss will be the one at Caulfield Racecourse on February 25. That’s the date set for three of Melbourne’s most prestigious Group 1 races in 2017: the Blue Diamond Stakes, the Futurity Stakes, and the Oakleigh Plate.

The Blue Diamond Stakes is a superb race at which to identify legendary horses of the future, since it features 2-year-olds only, at set weights of 56.5kg for colts and geldings, and 54.5kg for fillies. In 2016, the total prize purse for the Blue Diamond Stakes was increased to $1.5-million, making it Australia’s richest race for 2-year-olds. Run over 1,200m, it is also seen as a useful form guide for the Group 2 Todman Stakes in March.

Adelaide-born jockey Dwayne Dunn is the acknowledged king of the Blue Diamond Stakes. Starting in 2005, he won the race four times in succession: on Undoubtedly in 2005, Nadeem in 2006, Sleek Chassis in 2007, and Reaan in 2008. The 2016 Blue Diamond Stakes was won by colt Extreme Choice, ridden by Craig Newitt.

The longest of the three sprints attracting punters’ interest on the race card, the 1,400m Futurity Stakes, is handicapped according to Australian Weight-for-Age rules. It is only open to horses three years old or more, and betting fans are advised to take a careful look at the favourite before placing a wager. This is because since 2000, favourites have won the Futurity Stakes nine times, and only on four occasions has the favourite missed a place.

The Futurity Stakes purse, at $500,000, isn’t as impressive as that for the Blue Diamond Stakes, but the race has still attracted some of the sprinting champions of Australian turf racing. These include Typhoon Tracy in 2010 and More Joyous in 2011. New Zealand horse Turn Me Loose won the race last year.

At 1,100m, the Oakleigh Plate is the shortest of the three races at Caulfield on February 25. It is an open handicap, also with a $500,000 purse. The long run out the chute to the race’s only turn makes barriers less significant, so a bad barrier draw for a strong horse shouldn’t worry punters unduly.