BTC Cup: Five Sprinters to Back 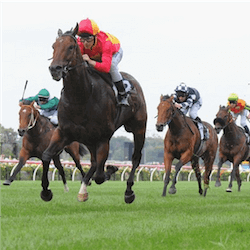 The 1200m BTC Cup at Doomben has been a regular Brisbane sprint during the Queensland Winter Racing Carnival since 1964, albeit with a variety of names and distances. This year sees the name, distance and venue change, although its Group 1 status remains unaltered and the purse has been increased to $700,000.

The BTC is now the Darley Kingsford Smith Cup, to be run over 1300m at Eagle Farm on 27 May. Australian betting fans are waiting for the field to be finalised. Until then, a look at the recent form of the horses topping the ante-post betting might be instructive.

Sensational Perth gelding Black Heart Bart is currently top of the Kingsford Smith betting at $6.00. He has a career record of 39: 16-12-2, with all of his wins coming from sprints between 1000m and 1420m. He has won twice already this year, both times in 1400m Group 1 races at Caulfield in Melbourne.

The 6-year-old is also the $3.50 favourite to repeat his 2016 triumph and win the Darley Goodwood at Morphettville this Saturday, so punters will have a chance to check his form one more time before he transfers from Adelaide to Brisbane.

Clearly Innocent is another promising sprinter with Kingsford Smith hopes. The 5-year-old gelding proved his class over 1300m at Scone last Saturday, winning the Luskin Star Stakes for the second year in a row. His career record is now 14: 8-1-0, and he is at $7.00 in ante-post betting.

Derryn, the colt that won the 1200m Arrowfield 3yo Sprint at Randwick in April, is also at $7.00 for the Kingsford Smith. He ran a close third to Redzel and Counterattack in the 1200m Doomben 10,000 on Saturday.

Redzel isn’t among the Kingsford Smith nominees, but 4-year-old entire Counterattack is. He was chasing hard at the end of the 10,000, so the extra 100m at Eagle Farm may be decisive, and he is being offered at $8.00.

The last horse nominated for the Kingsford Smith with single-figure odds is Voodoo Lad at $9.00. The 5-year-old Darren Weir-trained gelding hasn’t won a race since the 1400m Moonga Stakes at Caulfield in October last year, but his last two disappointing finishes at Randwick might be attributable to the heavy going. If the weather is fine at Eagle Farm, it could be a different story.