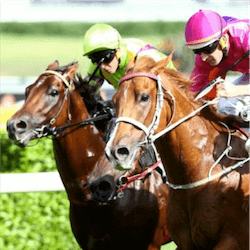 The Rebranding Of The BTC Cup

Having first been run in 1964 as the JT Delaney Handicap, the BTC Cup has had a long and celebrated history as one of the finest group 1 weight for age races in Australia. Some of the finest thoroughbreds have taken part in the race like the legendary Black Caviar and Apache Cat.

The race is set for a new face in 2017 as the BTC Cup gets rebranded as the Darley Kingsford-Smith Cup. One of the biggest changes is the upping of the prize money on offer at the event. Last year the total funds on offer was AU$500 000 but this year that sum has been pushed up to AU$700 000, a very attractive figure indeed.

Additionally the total length of the race has also been extended. The previous BTC Cup races were held at 1200m, but they will now be run at 1300m.

Currently 64 entries have been received during the race nomination process. The entries represent some of the finest competitors in weight-for-age racing.

Of the nominees, most people are keeping their eye on the Bjorn Baker trained gelding, Music Magnate. With a Victory Stakes win as well as a Doomben 10 000 title defence nomination, the team looks set for great things this year.

This will be Music Magnate’s first run at Eagle Farm after they failed to make the bid for the Stradbroke Handicap.

They would love to replicate their 2015 BTC upset with Hot Snitzel and to this end they have entered Russian Revolution, a Hot Snitzel colt, Tycoon Tara, Artistry and Sea Siren.

The Return Of Mahuta

From the outside, Darren Weir makes a return with Mahuta who made a huge impact in 2015 with six wins in a row on the track.

Two poor showings and a hairline pelvis fracture has left the four year old out of the races in 2016 and many fans are awaiting its return at this year’s Darley Kingsford-Smith Cup.