Churchill Firm Favourite for the 2000 Guineas 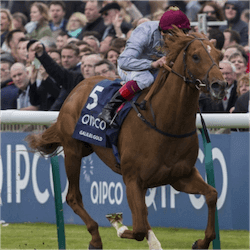 The QIPCO 2000 Guineas is set to take place at Newmarket on the 6th of May. The first classic of the season officially launches the 7th edition of the British Champions Series and it seems trainer Aidan O’Brien has the best hand yet. For O’Brien, both Churchill and Caravaggio are top of the ante-post betting.

According to O’Brien, Caravaggio, who is sitting as second favourite could go straight to Newmarket or head to the Pould d’Essai des Poulains in a complete change of tactic. O’Brien was looking at running Caravaggio in the Listed Patton Stakes at Dundalk before any of the British Classic plans were made. However, is seems he has now changed his mind. Speaking to the press, O’Brien said that they took the colt to Nass and were happy with his performance. They have now decided that he will either run the Guineas at Newmarket or at the French Guineas.

Caravaggio had an impressive season last year. He was unbeaten in four starts but has not run since August at the Group 1 Phoenix Stakes. To add to this, he has never run beyond six furlongs. But despite these limitations, he is still featuring quite prominently in the Guineas Market. Caravaggio’s odds currently range from 5-1 to 8-1.

Frankel’s Offspring in the Running

Both Churchill and Caravaggio could have some stiff competition from several offspring of the famous Frankel who won all none British Champions Series races in 2011 and 2012. Frankel has three sons racing in the 2000 Guineas including Frankuus, Eminent, Swiss Storm and Seven Heavens.

Hugo Palmer, who claimed a good win last year with Galileo Gold has five possibles in the race. This includes Escobar, Best of Days, Gulliver, Via Serendipity and Omeros. Of the French horses, National Defence heads up the list of possibles. Trainer Criquette Head-Maarek has an excellent Guineas record with a total of 4 wins from 12 runners. It has to be said though that all of his wins have come from 1000 Guineas races.

Speaking to the press Head-Maarek said that his horse National Defense had run well over the winter and was working on the grass for the first time this year. He went on to say that the National Defense looks physically good, has put on a lot of weight and has a nice shiny coat to boot. He does recon he needs a bit of sun though.