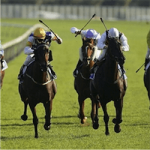 David Hayes is looking forwards to their performance at the Australia Oaks Day at Randwick this coming weekend.

Despite the fact that it looks like the horses will be facing a wet track, Hayes still is looking for a win for his two stars, Harlow Gold and Tulip.

These two horses are the closest Hayes has come to achieving a victory in the Group 1 races. Harlow Gold came in a confident third at the Vinery Stud Stakes while Tulip secured a third as well at the Golden Slipper.

Their stable mate, Almoonqith will be taking part in the Sydney Cup while Harlow will be racing in Australian Oaks Day.

David Hayes stated that the expected wet track is not ideal.

He said that the ground was pretty heavy when Harlow Gold ran for a third place at the Vinery and she performed well. Ideally though he would prefer if she could get some dry ground under her.

Harlow Gold already ran a solid 2500m for the Crown Oaks in Randwick last spring securing a second place behind Lasqueti Spirit, so the 2400m Australian Oaks Day race should be no sweat for the mare.

Her stable mate Almoonqith is a bit of a wild card at the moment. He finished 7th on the 2400m Mornington Cup but Hayes feels the 3200m distance he will be running for the Sydney Cup will suit him a lot better, although Hayes did concede that Almoonqith is not strong on hard track.

After the rainfall in the week the track for the Australian Oaks Day was rated a heavy 9.

Hayes also got a glimpse of Harlow Gold’s potential performance on Tuesday when the track was rated a heavy 9 as Harlow had a warm up gallop on the wet surface.

Hayes stated that Harlow definitely did not look too at home on the track.

That said, when Harlow achieved the third place at the Vinery stud stakes behind Montoya’s Secret and Nurse Kitchen she was running on a heavy 9 rated track as well.

Even though the Australian Oaks Day track conditions are not ideal for horses or trainers, it still looks set to be a great event.

The unpredictable track conditions the weekend and the great selection of horses competing for the Australian Oaks Day gold will provide great action for punters.