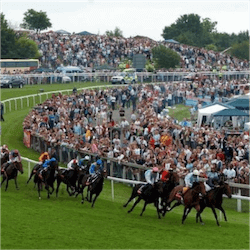 There is an embarrassment of riches in the 13-horse field for Melbourne’s last group race of the season this Saturday: the 1200m Group 3 $150,000 Bletchingly Stakes at Caulfield. The weight-for-age sprint will feature the top four finishers in Caulfield’s 1100m Sir John Monash Stakes two weeks ago, as well as the top two from the 1200m All Victorian Sprint Series Final at Flemington, and one or two champions returning from spells.

Aussie punters will be studying form, weights, and barrier draws trying to pick a winner, but there are several contenders. If the forecast rain sticks around till the weekend and the Bletchingly going is heavy, Daytona Grey could bring Morphettville trainer Leon Macdonald, and punters backing the gelding at $25.00, great joy.

The 7-year-old was still closing on Supido when pipped into second at the Monash, and the extra 100m, plus Daytona Grey’s barrier 1 draw, might be enough to give him victory this time; especially on a rough track. If it’s fine, 5-year-old Supido is the better bet, even though he’s jumping off from barrier 5 and carrying more weight than he’s used to. The Michael Kent-trained entire is the $2.20 favourite on Saturday, when he’ll be ridden by apprentice jockey Beau Mertens. You can get your bets in at CrownBet and see whether you can back the race winner, or for a safer option, go for a Place bet.

More Stiff Competition Through the Field

Murt The Flirt and Divine Ten finished third and fourth at the Monash, and although 7-year-old Divine Ten at barrier 11 is a $50.00 long shot for the Bletchingly Stakes, Murt The Flirt might be a more prudent punt. Drawn in barrier 4, the 5-year-old gelding is at $15.00.

Tashbeeh, with the excellent draw of barrier 2, finished ninth in the Vic Sprint Series Final, and the 5-year-old entire is also an outsider this Saturday, at $33.00. Ability, at $7.00 for Bletchingly, and Duke of Brunswick at $17.00, finished first and second in the Vic Sprint Series. Despite respective barrier draws of 7 and 10, both could offer a strong challenge to Supido.

Then there is second favourite Lankan Rupee, at $3.50. The gelding was considered the best sprinter in the world three years ago, but he’s now returning after a spell battling injuries. He’s looking for his first win since 2015, but at the age of 7 and drawn in barrier 9, those backing him might be overly optimistic. Chocolate Holic, drawn at barrier 3, could prove a more rewarding $11.00 bet.