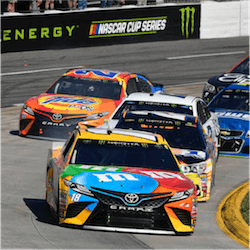 All over the world, stock car-racing fans take the Monster Energy NASCAR Cup Series seriously, but even ardent Aussie sports betting enthusiasts don’t take it quite as seriously as folks in Alabama. That’s the only inference to be drawn from Governor Kay Ivey’s declaration that this Sunday, the day of the Alabama 500 at Talladega Superspeedway, will be celebrated officially in the state as ‘Dale Earnhardt Jr Day’.

It promises to be a pretty emotional day for Earnhardt’s fans, as North Carolina’s favourite NASCAR veteran will be taking on the Talladega Superspeedway in a MENCS race for the last time, 16 years after his first win on the racetrack. Earnhardt had a phenomenal streak of five wins from seven races at Talladega between 2001 and 2004, finishing as runner-up in the other two.

If he wins Sunday’s race, the second leg in the 2017 Cup Series’ Round of 12 playoffs, he’ll move into sole second place in the all-time wins list at Talladega. His father, Dale Earnhardt Sr, still holds the record of 10 MENCS victories at the Alabama track.

No Hope of a Cup Series Title

Even if Earnhardt does win Sunday’s race, however, he doesn’t have a shot at taking the MENCS drivers’ championship this year. That ship has already sailed: Earnhardt missed the playoffs cut-off for the Top 16, so he’s driving purely to keep up his points rankings at this stage of the series, although Sunday will add a dollop of nostalgia.

The driver who secured his progress to the Round of 12 with a win in the first of three Round of 16 legs was New Jersey’s Martin Truex Jr, driving for Furniture Row Racing. Truex also won the first leg of the Round of 12, the 2017 Bank of America 500 at Charlotte Motor Speedway in Concord, North Carolina, last Sunday.

This automatically puts him through to the Round of 8 starting on 29 October with the First Data 500 in Ridgeway, Virginia, no matter how he finishes in the next two legs of the Round of 12. As a result, Truex remains the favourite in outright betting to win the 2017 Cup Series, with online sports betting sites offering him at around $1.50.

Truex’s strongest competition right now looks likely to come from Kyle Busch, Kyle Larson and Kevin Harvick, who are all offered at below $10.00