Ducati Up for Final MotoGP Push 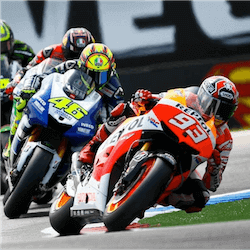 Team Ducati are heading to Sunday’s final 2017 MotoGP World Championship race, the magnificently named Grand Premi de la Comunitat Valenciana de motociclisme, with a spring in their step after the unveiling of their new Panigale V4 at the Milan Show on 5 November, to much drooling from bike nuts.

The Ducati camp also buoyantly insist that Andrea Dovizioso, fresh off a win at Sepang in Moto GP Malaysia, can triumph in the Valencia race too, and simultaneously overtake the defending champion, Repsol Honda’s Marc Marquez, on the points ladder to clinch the 2017 riders’ title.

It’s not a conviction shared at online sports betting sites. Marquez is still odds-on at most of them, at a best return of 16 cents on the dollar, to win his second consecutive world championship, which would also be his fourth in five years competing in the top category.

Dovizioso is being offered at $7.00 and above, and he’s the only rider in the contest with a hope, however slim, of catching the Spaniard.

The Italian’s on 261 points, 21 points behind Marquez’s 282. A win in Valencia would net Dovizioso 25 points; so the Honda rider needs only 5 points from the race to move out of reach and retain the title. That’s a finish at 11th or better.

Which isn’t to say that everyone else is going to roll over for the 18th race of the season. Yamaha’s Maverick Vinales and Valentino Rossi, currently third and fourth on the ladder respectively, could be a threat in Sunday’s race. Betting sites have Vinales at $5.00 and Rossi at $7.00.

Dovizioso’s Ducati teammate Jorge Lorenzo is also being offered at $7.00 to win in Valencia. His surprise second place in Sepang, his best and only his third podium this season, has put him back on the radar, as is the fact that he’s defending his 2016 Valencia title.

But the favourites on Sunday remain Dovizioso and Marquez, who will be assured of home crowd support. The Ducati rider is on $5.00. The defending champ, who took back the lead with a masterful win in the Australian MotoGP on 22 October, as Dovizioso battled to a disastrous 13th, is at $3.00 and under.