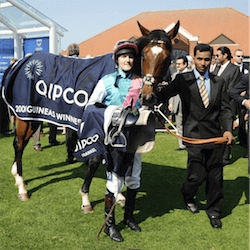 Australian racing fans awaiting the 2000 Guineas Stakes at Newmarket still have some time to consider the field. It is only set to take place at the famous Suffolk racecourse on 6 May.

There are currently 69 horses entered for the Guineas, but that figure will be reduced significantly. With that said, ante-post betting offers some interesting options for Australia’s online punters willing to take risks.

Trainer Aidan O’Brien, who already has seven Guineas winners on his record, has 11 possibilities entered among the 69. Three of his colts are definitely worth a closer look, if and when they do make the final field.

Irish colt Churchill is leading the ante-post odds at around 6-4. He finished third in his debut race and took consecutive wins in his next five starts, the last two in Group 1 races. If he makes the field, he will be a strong contender in the one-mile Guineas.

The other two colts from O’Brien’s stable attracting punters’ interest are Caravaggio and War Decree, both foaled in Kentucky. Caravaggio is at around 6-1, the second favourite in the ante-post betting, based on his unblemished record of four wins in four starts.

War Decree’s record isn’t as impressive as Caravaggio’s, with only two wins from three starts and one second place. He’s still attracting some interest for the Guineas, however, with odds of between 14 and 16-1.

Will 2017 See a Triple Crown Challenger?

Dating back to 1809, the QIPCO 2000 Guineas Stakes for three-year-olds over 1609m at Newmarket’s Rowley Mile Course is one of England’s most historic flat races. Not only the first of five Classic races each year, it is also the first leg of English horse racing’s Triple Crown.

The other two legs are June’s Derby at Epsom Downs, and Doncaster’s St Leger Stakes in September. No one has won the Triple Crown since Lester Piggot did so on Nijinsky in 1970.

In fact, the last time anyone was even in the running was 2012, when Irish-trained colt Camelot won the Guineas and the Derby. However, he finished second in the St Leger, so punters will be hoping this year sees a new Triple Crown challenger arise.