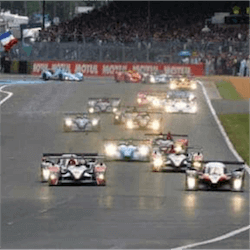 The 24 Hours of Le Mans (24 Heures du Mans) is considered to be the world’s oldest car race in endurance racing. First held in 1923, the race is organised by the Automobile Club de l’Ouest (ACO) and is often referred to as one of the most prestigious automobile races in the world. Le Mans represents a single leg of the famous Triple Crown of Motorsport along with the Monaco Grand Prix and the Indianapolis 500. The race is run on the Circuit de la Sarthe which is a mixture of closed public roads as well as a specialised racing circuit.

In the Le Mans race, teams have to balance the car’s speed with the ability of the vehicle to race for 24 hours without sustaining any major mechanical damage. In 2012, the Le Mans race officially became part of the FIA World Endurance Championship. Over the years, the race has inspired a number of imitation races including Nürburgring, Daytona, Bathurst and Spa-Francorchamps. The origins of the race began at a time when Grand Prix racing was the dominant form of motorsport.

A Test of Endurance and Speed

The 24 hours of Le Mans was specifically designed to represent a different sort of test for the drivers and the teams. Instead of focusing on the speed of the car, the Le Mans would test the ability of the manufacturers to build reliable cars that were fast but also dependable and fuel efficient. Innovations in fuel efficiency and endurance were the key to winning the race. The layout of the Le Mans track also meant that the cars needed better stability and aerodynamics at high speeds.

The use of public roads meant that the track is less maintained than permanent circuits. This also created the need for more reliable cards with increased strain on the parts and tires. The 2017 race will be the 85th 24 Hours of Le Man and will be held on the 17th to the 18th of June at the at the Circuit de la Sarthe in Le Mans. Teams earn automatic entry invitations to the Le Mans if they have won any of the previous 24 Hours of Le Mans races, any of the European Le Mans Series, the Asian Le Mean Series, or the Michelin GT3 Le Mans Cup.

The teams that earned entries to the 2017 Race include: