Eyes on Kobayashi in Vain Stakes 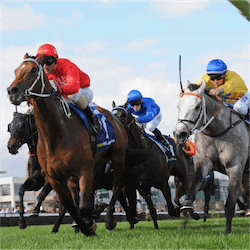 Both are run over 1100m, each with total prize money of $150,000. The Vain Stakes, inaugurated at Caulfield in 1992, is named after legendary stallion Vain. In the late 60s, the sprinter achieved a record of 14: 12-2-0 in just two years, before retiring to stud and becoming a sire of champions.

Currently, the Vain Stakes is a sprint that attracts quality youngsters returning from a spell and others riding high on winter success. It’s seen as a good form guide for races like the Group 3 HDF McNeil Stakes at Caulfield later this month and the Group 2 Danehill Stakes at Flemington in September.

Kobayashi Looks Set to be a Contender

Aussie betting fans won’t know the 2017 Vain Stakes field until Wednesday, but one of the colts likely to be racing is Kobayashi, sired by I Am Invincible, the winner of four sprints in his nine-race career, including the 2009 Sir John Monash Stakes over 1100m at Caulfield. He’s one of Australia’s most successful sires according to wins, and Kobayashi is shaping up to be a strong sprinter.

The 3-year-old bay ran his first race in November 2016, finishing 8th of 12 over 1000m at Flemington. Two weeks later, he was 3rd of 8 over 100m at Moonee Valley, and a rest afterwards did him the world of good. In April, he won the Wellington R.C. Handicap and the Thoroughbred Club Cup, both over 1200m at Caulfield.

Co-trainers Leon and Troy Corstens reckon he’s a top quality sprinter, and after the Vain they will take Kobayashi to either the Danehill Stakes or the Caulfield Guineas Prelude.

Get your bets in online at Luxbet and see if you can predict who will be a winner.