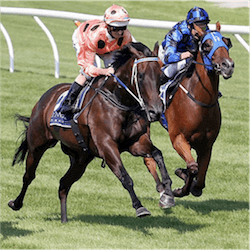 Originally run over five furlongs in 1955, since 1973 the Lightning Stakes at Melbourne’s Flemington Racecourse has been set at a metric 1,000m. One thing that hasn’t changed, however, is the thrill the race generates: a flat-out sprint down the Flemington straight, it remains one of the most exciting races on the Victoria Racing Club’s calendar, and a social occasion of note.

In 2014, after legendary mare Black Caviar had won the race in 2011, 2012, and 2013, the event was officially renamed the Black Caviar Lightning Stakes. This year sees another new feature: VRC has coupled the Lightning Stakes on February 18 with the inaugural Great Horse Raceday, a celebration of Melbourne’s cultural diversity and in particular, its growing population of Asian punters.

Food, Entertainment and Racing All on Offer

Flemington’s first Great Horse Raceday combines the thrills of weight-for-age thoroughbred racing with an infusion of Asian culture. The phrasing of the name itself is a nod to Asia, VRC CEO Michael Love admits, evoking all the great horses, including Black Caviar, that racing fans have been able to watch over the years at Flemington.

The off-track entertainment will embellish this theme. The Terrace, one of the most popular hospitality venues at Flemington, is looking spruced up after refurbishments, and along with all the other restaurants and eateries at the racecourse, will offer Asian-inspired menus to punters.

The theme will carry through into the live entertainment, and there are also a host of children’s activities planned to make the day family-friendly. As it is, under-16s accompanied by an adult already get into Flemington free throughout the year, so the club is using innovative strategies to convince Melbourne’s racing fans that they will have more fun live at the track, than they will following the race from a computer or TV.

If you can’t make it to Flemington on February 18, however, you can still enjoy a punt on the 2017 Lightning Stakes at online betting sites. Many sites also let you watch live streaming of the race itself, so it’s almost the same as being on the track, without all the delicious Asian food that will be available at Flemington.

It’s still too early to offer any tips, of course, as the final field and draw is yet to be announced. But we will keep you posted as race day approaches.