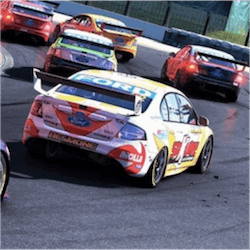 It was announced that all Supercars teams will receive a new, upgraded brake kit as the season heads into the Red Rooster SuperSprint. The supplier of these brake kits is AP Racing. They have made a range of improvements in their kit design to provide teams with a more reliable system.

This follows an incident by driver Mark Winterbottom where his left front brake rotor exploded during a race, pushing him into a sand bank. Even though AP Racing investigated the incident, they could not recreate the incident in lab conditions. They instead opted to start from the ground up and essentially redesigned the brake kit.

AP Racing has shifted some weight around on the parts, moving much weight from the 72 vanes right onto the brake plate. They have also tweaked the composition of the cast iron material used to construct the rotors for the brakes.

So far the changes are not said to cause any performance differences. The team have recommended however that the drivers eliminate front face cooling to avoid cold areas that could cause thermal shock.

McLaughlin Still The Man To Beat

New Zealand racing star, Scott McLaughlin continues his domination heading into the Red Rooster SuperSprint. The driver currently sits with an amazing 111 point lead. McLaughlin has so far finished in the top 10 position in his last 13 races.

When McLaughlin took part in the Queensland Raceway event at Ipswich, most fans were rooting for veteran Craig Lowndes who is a 12 times Ipswich winner. Memories of victories past were soon forgotten after McLaughlin twice lapped Lowndes in the 120km race.

Racing veteran Jason Bright has announced that he has re -signed with Pro Drive until at least 2018, just ahead of the Red Rooster SuperSpirnt.

This year sees the Introduction of the PIRTEK Pitstop Challenge for SuperCars crews. This new feature rates and scores the various pit crews on their performance in races. Following the Red Rooster Supersprint, four pit crews will be taken to the finals in Bathurst where they will compete for a $25 000 prize.

Currently Tim Slade and Freightliner Racing have the top spot in the rankings with 95 points. They are followed closely by Fabian Coulthard and Shell V Power Racing with 90- points.

Nissan Motorsport is in third place, but quite a stretch behind with 75 points. In fourth place is Nick Percat with Dunlop Racing.