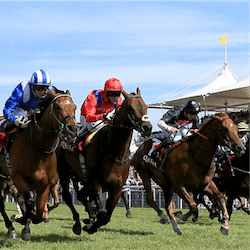 The Darley Goodwood, inaugurated in 1881 as the Goodwood Handicap, is an historic Australian sprint and a major social occasion on South Australia’s annual racing calendar. With this year’s purse boosted to $1-million, and prizes for the entire day’s card totalling $2.175-million, Goodwood Day will end the 2017 Adelaide Festival of Racing with a bang.

Run over 1200m at set weights with penalties, the Group 1 Darley Goodwood is one of seven black-type races scheduled for Adelaide’s Morphettville Racecourse on 20 May, so the day should provide lots to interest Australia’s online sports betting community.

At the track, there will be the usual array of fashion, dining and hospitality options for punters, including the Goodwood Luncheon with Hall of Fame jockey Darren Beadman and legendary racing broadcaster Terry McAuliffe as guest speakers.

Some Early Contenders to Watch

Punters sharing the Goodwood Day action online will be more interested in picking a winner. As South Australia’s most prestigious sprint, the Goodwood attracts a strong field, so it is way too early to settle on any of the ante-post favourites.

Nevertheless, there are several horses nominated for the Goodwood that would be well worth watching in their upcoming races before 20 May. The 2016 winner, Black Heart Bart, is the ante-post favourite for this year’s race, at $2.60.

Last year, the Goodwood was his first Group 1 career win, so many punters will be backing him for a repeat performance. The last horse to manage the feat was Musket Belle in 1911-12, so it will be quite something if the 6-year-old gelding can pull it off. Two wins in succession in his last two outings, both Group 1 races over 1400m at Caulfield, are a positive sign.

Black Heart Bart’s trainer, Darren Weir, has two other horses that could be worth a punt in the Goodwood: 4-year-old entire Hellbent and 5-year-old gelding Voodoo Lad. They are at $9.00 and $11.00 respectively in ante-post betting.

Illustrious Lad, trained by Peter Gelagotis, is being offered at $10.00. All nine of the 5-year-old gelding’s wins in 30 starts have come in sprints, four of them at Morphettville. In the Group 3 RN Irwin Stakes over 1100m at the Adelaide track on 22 April, he finished second behind Viddora, and many punters think the extra 100m at the Goodwood might make all the difference.