The Goodwood Gets a Purse Boost 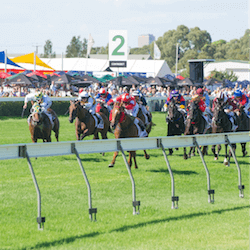 The 1200m Goodwood Handicap at Adelaide’s Morphettville Racecourse, now run as the Group 1 Darley Goodwood, dates back to 1881. For the first time, this year’s purse has risen to a cool $1-million, bringing total prize money for Goodwood Day, a highlight of autumn’s Adelaide Festival of Racing, to $2.175-million.

Trainer Darren Weir has three horses that Australian punters will be betting on, come 20 May. The 2016 Goodwood winner, Black Heart Bart, is the current ante-post favourite, after two consecutive Group 1 wins over 1400m at Caulfield. The 6-year-old gelding took the CF Orr Stakes and Futurity Stakes in February, bringing his career record to 39: 16-12-2.

Weir is planning a trial run for Black Heart Bart before the Goodwood, so online betting fans will be able to check his form after a two-month break. Currently, they can back him at $2.50; if he wins again this year, he will become the first horse to take two Goodwood crowns in a row since Musket Belle in 1911-12.

The other two Weir horses to look out for in Goodwood prep races are 5-year-old gelding Voodoo Lad and 4-year-old entire Hellbent. Both are being offered at $11.00 right now.

Veteran 8-year-old gelding Riziz proved he still has what it takes with two brilliant sprints in March. He won the 1100m Oakbank Stakes at Oakbank, and Morphettville’s City of Adelaide Handicap over 1400m. Trainer Ken Sweeney has entered him in the Goodwood for a last hurrah before retirement, and at $51.00, he might be attractive to those looking for a promising outsider.

Most betting fans, however, will be backing one of the younger sprinters on 20 May. The biggest threat to Black Heart Bart at the Goodwood looks like last year’s BTC Cup winner, Malaguerra. The 5-year-old gelding is second favourite at $7.00.

Vega Magic, the 4-year-old gelding that won the 1400m Group 3 AJ Scahill Stakes at Ascot in December, is next in the betting at $8.00. Illustrious Lad, another 5-year-old gelding, could also be a profitable bet at $11.00.