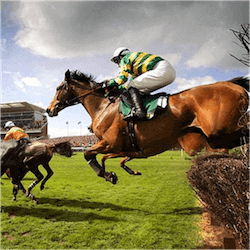 As Europe’s richest jump race, the annual Grand National at Aintree in England attracts the attention of punters all over the world, Australia included. Online betting fans know that the race’s 30 fences over 6907m is a supreme test of strength and endurance, in which outsiders can come in first as easily as favourites.

In fact, 100-1 shots have triumphed five times in the past 100 years. The Grand National’s history stretches all the way back to 1839, and the 2017 race on April 08, with a purse of £1 million, should attract a field packed with likely contenders. However, Australian betting fans may have to reconcile themselves to the loss of the current favourite, Don Poli, and a couple of other horses worth a punt.

The 8-year-old gelding is owned by Gigginstown House Stud, and after the handicap weights were announced last week, the Irish stable denounced the British Horseracing Authority’s decision to weight all three Gigginstown Grand National entries heavily.

Gigginstown owner Michael O’Leary and his racing manager brother, Eddie, have criticised Don Poli’s handicapping at 73kg, while the other two geldings they have entered, 10-year-old Empire Of Dirt and 9-year-old Outlander, have been weighted with 73.5kg and top weight of 74.4kg respectively.

Both O’Leary brothers have made it known that they feel these weights, around one kilogram heavier than the horses carry in Ireland, are punitive indications of English bias. No final decision has been announced yet, but it is possible that all three horses will be withdrawn. Outlander, at 33-1, was always going to be a long shot, but Don Poli currently leads the betting at 14-1. Empire Of Dirt is the 20-1 joint third-favourite along with One For Arthur, The Young Master and Vieux Lion Rouge.

Irish 9-year-old gelding The Last Samuri, second favourite at 16-1, is also supposed to carry a hefty 72kg, so we have yet to see whether owners Paul and Clare Rooney will keep him in the field.

In terms of handicap weights versus a horse’s age, experience and general form, several tipsters are predicting three more geldings to watch in their upcoming races leading up to the Grand National. French 7-year-old Le Mercurey, Irish 10-year-old O’Faolains Boy and French 8-year-old Vicente are all currently at 33-1, but each has a shot at becoming triumphant outsiders come April 08.