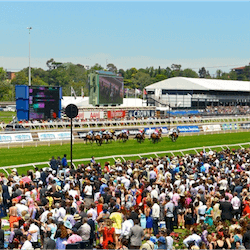 The next two weekends sees some fantastic racing lined up in the Spring Carnival.

2 September – The 6 horse A$150 000 Concorde Stakes has delivered Redzel an outside barrier spot that may not be ideal for trainer Paul Snowden.

Redzel is coming off a massive win at the A$700 000 Doomben Stakes and Snowden is eyeing another win at the Concorde.

Redzel can expect a string challenge from the inside barrier where Marc Connors’ Super Too will be a serious threat to the rest of the horses.

2 September – Pat Webster’s Happy Clapper will be joining the Tramway field after he did some impressive trials at Randwick. Happy Clapper finished third two weeks ago, losing out to the already legendary Winx.

Webster will be keeping an eye out for another top pick for the Tramway, Invincible Gem. She has been in fantastic form and will be keeping the field on their toes if she delivers the performance she has shown in trials.

2 September – I Am Excited, trained by David Pfeiffer will be a horse to watch at the Furious Stakes. Her chances are looking good if she holds the form she has shown in trials. She did a 800m sprint in a little over 54 seconds that places her well in the strong Furious Stakes field.

I am Excited is joined by Champagne Cuddles who trailed a 100m sprint at 1.10.88 which is good enough to provide a challenge if the field isn’t up to scratch on race day.

9 September – Winning her last 18 races consecutively, it is quite surprising that anyone else bothered to enter the Chelmsford stakes against Winx. Fans have called her the Usain Bolt of horseracing and she definitely lives up to the title.

Since her win at the Warwick stakes, she has been unstoppable. Winx will also be set to wear a lovely pair of earmuffs at the event due to her trainer Chris Waller worrying that she will miss the start over all the crowd noise.

9 September – Darren Weir is pushing Hellbent and Voodoo Lad for the McEwen Stakes.

Voodoo Lad has the strongest form in his recent sprints but Weir is set on making Hellbent the powerhouse sprinter he believes he can become.

Competing for the A$250 000 grand prize, the pair aren’t taking any chances. The field includes Mick Kent’s fresh faced Abbey Marie looking to land her second win of her short career. Betting on this race is always exciting, and you can do so online at Luxbet.