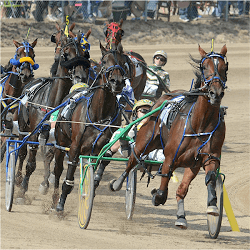 A Closer Look at Harness Racing Down Under

Harness racing is a derivative of the original form of horse racing that involves a Standardbred horse pulling a two-wheeled carriage, or sulky, in an oval ring.   The race is run on an oval track instead of a regular racetrack. A great amount of skill is required by the driver to control the horse’s speed and direction.  Harness racing is kept at a trot or a gait known as a pace, and horses to do not progress into a canter.

In North America, most of the races are run at a pace whereas in Europe the trot seems to be more popular.  The trotting and pacer gaits differ in the sense that the trotting horse moves opposite rear and front legs, pushing them forward at the same time.  Pacing on the other hand involves the horse to move either legs on one side of its body, simultaneously.

Harness racing is very popular in Australia and is growing in popularity every year, gathering a huge following.  Wagering on harness racing is common practice and has become a favourite amongst the equestrian sport lovers that is keen to wager and try their luck.

The History Of Harness Racing

Harness racing originated from the ancient Romans and Greeks and remained a popular pastime of their decedents. The sport is still called, hardrijen, which literally meaning hard driving. Harness racing spread all over Europe to North America, although there are slight differences in the way they conduct harness racing.  Harness racing was especially popular with the Dutch, so much so, that they will often claim that they were the founders of the entire sport.

In America, the Standardbred horse is the only breed that is used in harness racing.  The name Standardbred was derived from the practice of adding a horse’s name to a book that trotted or paced a mile in standard time, making them eligible to race.  A Standardbred is different from the stock standard thoroughbred that is used in conventional horse racing as they have longer bodies and shorter legs compared to their counterparts.  Standardbreds have a slightly better disposition because they have been bred with more docile breeds, while the Thoroughbred is known to be feistier.

The History Of The Standardbred

A sire named Messenger is considered to be the founding sire of the Standardbred in America.  Messenger was an impressive grey thoroughbred, which made his way to America in 1788 and was subsequently bought by Henry Astor.  Messenger produced many successful offspring and some were even legendary, including a great grandson named Hambletonian.  Hambletonian was very influential within the American harness racing scene and almost all Standardbred horses in America can be traced back to him. Hambletonian was better known for producing successful offspring than his racing abilities that are in themselves very impressive.

He remains one of the most well known sires with both thoroughbreds as well as Standardbreds his best known lines include the Blacklock line, as well as a horse called Fighting Charlie. Fighting Charlie won the Ascot cup twice, once in 1965 and again in 1966.

2017 looks set to be another interesting year for harness racing in Australia and it’s certainly a sport to keep an eye on if you’re an Equestian fan.