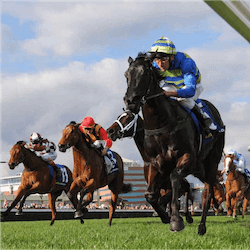 Australian sports betting enthusiasts expect great racing this Saturday, with PB Lawrence Stakes Day at Caulfield among the meetings offering excellent punting options. It’s always a prestigious day for the Melbourne Racing Club, but this year it’s extra-special, as 2017 is the centenary of the Charge of the 4th Light Horse Brigade at the Battle of Beersheba in World War One.

In honour of the 1917 victory, Saturday’s annual Spring Carnival event has this year been restyled ‘Charge of the Light Horse PB Lawrence Stakes Day’ by the MRC. Guests at Caulfield Racecourse will be entertained by the Australian Army Band before the main race, and at 11am, they can attend the Lone Pine Ceremony commemorating the Charge. Descendants of one of the Charge heroes will also be present, to talk about the deeds of the day.

The centenary is a significant one in ANZAC military history. On 31 October 1917, as part of a larger thrust of the British-aligned Egyptian Expeditionary Force against Turkey’s Ottoman Empire, Australia’s 4th Light Horse Brigade, under Brigadier William Grant, was among the regiments fighting to take Beersheba in southern Palestine.

A daring charge by the Light Horse at dusk overwhelmed the Turkish trenches and allowed the Aussies to secure Beersheba for the advancing EEF. The eventual defeat of the Ottoman Empire changed the course of history in the region, and the Charge of the Light Horse is an enduring example of Australia’s contribution to the modern international order.

The titular race of the day, the Group 2 weight-for-age PB Lawrence Stakes over 1400m for 3-year-olds and older, carries a purse of $200,000. A field of 18 has been nominated for Saturday, but according to the betting sites, it’s a two-horse race.

Black Heart Bart and Hartnell are neck-and-neck in the odds, with most sites offering both champion geldings within half a dollar of $3.50. Darren Weir’s Black Heart Bart may have the edge, though, coming off consecutive wins at Caulfield’s CF Orr Stakes and Flemington’s MSS Security Stakes, both over 1400m.