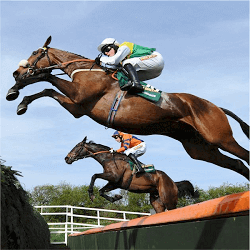 Jump racing is a form of horse racing where thoroughbred horses gallop and jump over various kinds of hurdles or obstacles. This is all done at high speed, with up to forty horses on the track at one time. Unlike flat racing, the horses do not begin in starting stalls, instead all lining up and running when the starting gun goes off.  Jump racing is a highly popular sport both for spectators as well as punters due to its fast speed and exciting results but it’s again come under fire due to the risks that it imposes for both the riders and the horses.

There is much controversy surrounding jump racing. Today it is banned in all but two of Australia’s states due to pressure from animal rights groups. Racing Victoria has given the sport an extended license as it met the required amount of equine deaths for 2015, but it remains to be seen whether jump racing will continue, or whether it will die out due to being stifled by regulatory bodies.

Jump racing first became popular in Australia in the 1800’s, almost half a decade after flat racing did. Brought over by British settlers, it never really took off as flat racing did, although many did bet on it. The first hurdle race was held in 1842 in Adelaide. Jump racing is also called steeple chasing as it used to be a horse race from church steeple to church steeple, over whatever hurdles were present on the route. In Britain it was based on the sport of fox hunting which required horses to gallop over country terrain and jump fences and other obstacles.

Famous Australian jump racing horses have included Crisp, Mosstrooper, Redleap, Karasi, Some Are Bent, Al Garhood, Bashboy and Gotta Take Care. Crisp is best known for taking on the mighty Red Rum, and actually beating him in 1973 at the Grand National in England.

Crisp was a bay gelding that was foaled in 1963 by stallion Owen Tudor. He began his career in Australia before moving to Britain where steeple chasing was more lucrative. He won a number of races carrying weights that illegal in todays steeplechases, and made a name for himself on the circuit.

Whether or not jump racing will continue as an Australian sport will depend very much on whether there are any further fatalities or serious injuries, and the nature of the sport seems to indicate that this unfortunately may well be the case. This could see the sport resigned to the history books for both the good of the riders and the horses, but there’s still no denying it’s exciting to watch!