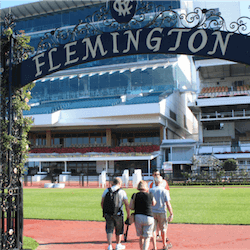 June Raceday at Flemington on Saturday, 10 June, is one that Australian racing fans should post a reminder about on their phones. Seven races on the nine-race card have a purse of $100,000, and Victoria Racing Club’s bars and restaurants will be doing their utmost to make it a memorable day on the winter racing calendar.

It should be a good day out for Melbourne punters looking for off-season action, and it’s sure to engage Australia’s online sports betting fans too. Nominations will be out on 5 June, when punters will be able to start considering their options in earnest.

Racegoers can also get all the June Raceday information they need by downloading a mobile app on Android or iPhone: the Flemington Official Raceday Guide.

Two Series Heats on the Card

Gates open at Flemington at 10.45am next Saturday, with the first race, the 1100m Super Vobis Two-Years-Old Handicap, giving punters a look at the sprinters of the future an hour later.

Although final names for all nine races on June Raceday are still to be confirmed, the big draw for most betting enthusiasts are the two series heats on the card: heat six of the All Victorian Sprint Series and heat five of the VRC-CRV Championships Series.

The final races in both these series will be run on 8 July, so these heats could throw up potential winners down the line, and punters will have more opportunities to back them in upcoming winter races. Last year’s Sprint Series Final was won by 5-year-old Ruettiger, while 6-year-old mare Iggimacool took the Championships Series Final.