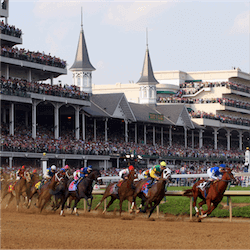 Australian horseracing fans have plenty of great races at local courses and high-profile events in New Zealand to keep them entertained, but online sports betting puts the most legendary events from all over the world within instant reach too.

The Kentucky Derby, run annually without fail since 1875, is a case in point: without a doubt the biggest race in the USA, it now attracts a global audience on sports betting sites every spring. This year, the iconic one-and-a-quarter-miler at Churchill Downs in Louisville, Kentucky, will be run on May 06.

It’s the closing Saturday of the two-week Kentucky Derby Festival, climaxing in the 2000m Grade 1 stakes race for 3-year-olds that gives the fortnight its name. The Derby is run at set weights: colts and geldings carry 57kg, while fillies have a 55kg handicap, and the race is the first leg of the American Triple Crown. The purse this year is a guaranteed US$2 million.

Prep Races to Keep an Eye On

Australia’s betting community won’t know the final field for the Kentucky Derby until May, although an updated list of the horses in consideration, along with their current ranking on the Road to the Kentucky Derby, is available on the official race website.

There are a few races coming up in April that punters will want to check out, as they are seen as good prep races for identifying Kentucky Derby possibilities. The three most important are the Florida Derby at Gulfstream Park, Hallandale Beach, on April 01, California’s Santa Anita Derby at Santa Anita Park on April 08, and the April 15 Arkansas Derby at Oakland Park in Hot Springs.

If current ante-post second favourite El Ameer stays in New York for Aqueduct Racetrack’s Wood Memorial Stakes on April 08, punters should watch the colt’s form with an eye to the Derby.

The ante-post favourite right now is another colt, Classic Empire, despite the lingering aftermath of a foot abcess that saw him disappoint in his last start: he ran third at Gulfstream in the Holy Bull Stakes on February 04. His stable is confident he will be fully recovered for the Kentucky Derby, so if he runs in the Fountain of Youth Stakes at Gulfstream on March 04, punters will get a better idea of his current form.