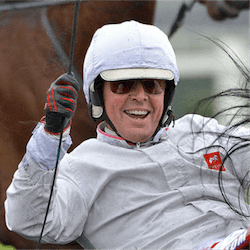 2017 was a year that saw a number of records set as well as a number of champions fall, both of the two legged and four legged variety. James McDonald may be remembered for the biggest fall from grace in 2016, but he doesn’t retain the title of Australia’s worst jockey. That goes to a man by the name of Les Boots, who has been afforded the accolade once again, and hopes to do the same in 2017!

Les Boots was a jumps jockey out of Adelaide. He was especially famous for having 40 falls from 39 starts. Two of those falls were out of the ambulance on the way to hospital. It was said that the Adelaide Hospital kept a close eye on the race cards for each week, and if old Les was riding they would book him a bed, no matter what.

Being a jumps jockey is no easy task to begin with, and when you have a bad a reputation as Les did, it is quite a feat to have even entered into his races at all. His horses always had a 100 to one chance, no matter how good they were, although to be truthful it is highly doubtful that he would have been given any decent rides anyway, at least not after he had shown his true form as a jockey.

In one of the races Les fell off, and actually managed to grab his mount’s bridle, heave himself back on at a full gallop, and continue the race. He then proceeded to fall off again two jumps on. The race organisers actually wanted to ban him because he was such a drain on resources, but like the famous horse Lusty, he was a crowd pleaser in his own right so luckily, for us, that never happened.

So often did Les fall, that he eventually got the nickname Old Autumn Leaves. It was a known fact that his wife always packed pyjamas for him for every race, as he would, without fail spend time in hospital. He claims that he spent 12 of his 18 years racing in the hospital, and was the only jockey to be guaranteed bed a breakfast after a race. He broke every bone in his body, including his neck, which kept him out of racing for two years, but didn’t stop him for good.

Old Autumn Leaves quips that once he went to a picnic, and was banned from riding the merry go round as it was too dangerous. He also recalls lying on the track one misty morning after seeing the rear end of his mount disappearing off and hearing the announcer saying that something may have to be shot. He hopped it back to the changing room before the ambulance got to him just in case, but it turns out they were talking about the horse. His great dream was to enter the Grand National in England, however his wife had his passport revoked muttering that he would probably drown in the famous water jump should he be given half a chance.

It remains to be seen whether Les will retain his title in 2017, but it would take a lot to beat his incredible record.