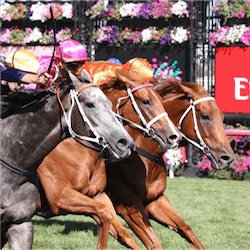 Australia’s horseracing fans have plenty of action around the country to keep them entertained throughout autumn. One of the highlights of the Melbourne racing calendar takes place at Flemington next Saturday, February 18, in the first leg of the Autumn Sprint Series Triple Crown, followed by the Oakleigh Plate at Caulfield and Flemington’s Newmarket Handicap.

The Lightning Stakes, renamed the Black Caviar Lightning in 2013 after superstar mare Black Caviar had won the race three years in a row, is one of the most exciting Group 1 weight-for-age sprints in Australian racing. It is a direct 1000m gallop down the Flemington straight for a purse of $750,000, run since 1955, and it always attracts some of the fastest sprinters available.

After a late launch in the 2016 Lightning Stakes, 6-year-old gelding Chautauqua powered through to snatch the win by a head from Terravista, the 7-year-old that had held the lead since the 150m-mark. Punters hoping to see him repeat the feat this year will be disappointed, however.

Managing part-owner Rupert Legh has indicated he’s an unlikely starter at Flemington, so soon after his February 11 run at 1100m Rubiton Stakes at Caulfield. Chautauqua’s next Flemington race is more likely to be the Newmarket Handicap on March 11.

Horses Worth Considering for a Bet

Illustrious Lad, on the other hand, is a horse that is nominated for the Lightning Stakes, although he may not be confirmed in the final field. If he is included, betting enthusiasts will want to see what odds he’s being offered at.

In four black type starts this spring, the 5-year-old gelding has never finished worse than second, making this his best season to date. His Group 2 win on Derby Day at Flemington, in the 1200m Salinger Stakes, was by more than a length, so he is a serious contender for the Lightning Stakes.

There are three other horse we fancy for the Black Caviar Lightning so far: 3-year-old colt Flying Artie is probably the most impressive, having never finished out of a place in six starts, and winning three of them. But punters should also consider two other up-and-coming sprinters: 4-year-old entire Spieth, and 3-year-old colt Astern.