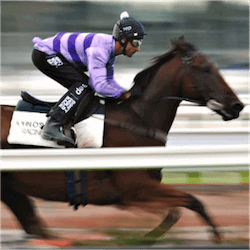 A love of horseracing is a trait generally shared by Australians of both European and Asian ancestry, and online betting on international races is just as popular in Asian Pacific Rim countries as it is in Australia. So Victoria Racing Club’s ‘Black Caviar, The Great Horse Raceday’ at Flemington on February 16, with Asian-inspired themes, cuisine and entertainment to accompany the racing, is more than a nod to the diversity of Melbourne’s race-goers; it’s also good business.

And it’s the perfect date for an outreach to a broader community, as Great Horse Raceday coincides with this year’s running of the Black Caviar Lightning Stakes. The 1,000m weight-for age handicap is a legend among Australian sprints: a straightforward gallop down the Flemington straight that arguable decides Australia’s fastest horse every year. It’s a great social occasion as well as the focus of major betting action, so the Asian flavour of the day will be shared with a massive audience.

Black Caviar was arguably the most exceptional mare in Australian racing history, with a record of 25 starts in her career and not a single defeat. She won the Lightning Stakes three years in succession from 2011-13, and her name was made the race’s official prefix in 2014 to commemorate the feat. The Lightning Stakes is the first of the Group 1 races in Australia’s Autumn Sprint Carnival, and it is also the first of two Australian legs in the annual Global Sprint Challenge.

Will Champion Chautauqua Return this Year?

The field for the February 16 race hasn’t been finalised yet, although some horses have been nominated provisionally. The 2016 winner, champion sprinter Chautauqua, will be favoured by punters if he is included on the card, but co-trainer Michael Hawkes has still not confirmed if the 6-year-old gelding will run. He is down for the TJ Smith Stakes at Randwick in March, but his owners are still deciding whether to take him on a second trip to Hong Kong, Royal Ascot in England, or stay home for the Lightning Stakes.

Trainer Nick Price has no such reticence for his 3-year-old colt Flying Artie, on the other hand. Coming off two impressive wins in October, Flying Artie is eyeing the treble in all three Group 1 races making up the 2017 Autumn Sprint Carnival: the $750,000 Lightning Stakes, the $1,25-million Newmarket Handicap at Flemington on March 11, and the $2.5-million TJ Smith Stakes in Sydney on April 01.