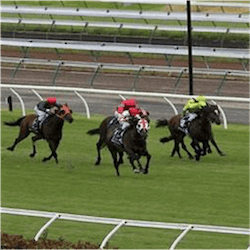 Trainer Peter Gelagotis has hinted that his spring loaded sprinter Illustrious Lad will be taking part in the event that is The Black Caviar Lightning Stakes this year. He has been so quick of late that he has yet to endure a finish worse than second.

Illustrious Lad’s stellar performance in the Group 2 Salinger Stakes which is a 1200m event on the Flemington straight during the course of Derby Day was indeed a run to behold. So too was his winning performance at the Listed WH Wylie Handicap of 1100m sprinting at Morphettville back in September as well as his runner up finish to Keen Array in the Listed Caulfield Village Stakes, which is also slightly longer than The Black Caviar Lightning Stakes at 1200m just 2 weeks before winning the Salinger Stakes.

Other choices for the day should include the likes of Arizona Wildcat, an in form filly that is probably due for another run before she mounts an assault on The Lightning Stakes. Trainer Lloyd Kennewell has alluded to the fact that what she lacks in size, she makes up for in fighting spirit. We couldn’t agree more and are looking forward to the day and seeing what Arizona Wildcat has in store for us all.

The Black Caviar Lightning Stakes is a Group 1, weight-for-age for all horses held over a distance of 1000m at the world famous Fleminghton Racecourse. There is an alluring prize pool that attracts punters from all across the region and for this year’s event the estimates are sitting at around $750,000.

The Lightning Stakes makes up the initial stage of the three-part sprint series over the course of the Melbourne carnival. It traditionally kicks off before the Oakleigh Plate at Caulfield Racecourse on the third Saturday of February as well as the 1200m Newmarket Handicap. Be sure to check out the race day line up as we get closer to the day and be sure to check back with us for more great race day insights and info.