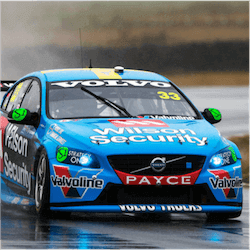 Saturday and Sunday provided enticing Virgin Australia Supercars Championship action for punters, with Races 15 and 16 at the Coates Hire Ipswich SuperSprint. DJR Team Penske were ecstatic after Race 15, thanks to New Zealand driver Scott McLaughlin. Already top of the drivers’ ladder, with Team Penske also leading the teams’ championship, McLaughlin went into the Ipswich races the favourite to win the 2017 tournament outright, at $2.30.

McLaughlin started Race 15 in pole position, but a cheeky spurt from Aussie Craig Lowndes, the record six-time winner at Ipswich driving a Holden VF Commodore for Triple Eight Race Engineering, saw the Kiwi lose the lead on the first corner. It took McLaughlin only three laps in his Ford FG X Falcon to take the lead back from Lowndes, however.

Seven laps later, Lowndes surged ahead again, while McLaughlin was in the pits, but by Lap 13, the young New Zealander was back in front, and he held the lead for the rest of the 39-lap race. The win took McLaughlin from six points clear of his nearest rival on the ladder, Triple Eight’s Jamie Whincup, to 111 points ahead.

McLaughlin was again on the front of the grid for Sunday’s 65-lap race, but this time he wasn’t able to recover from an early challenge. Rod Nash Racing’s Chaz Mostert, also in a Ford, started right behind him, but he slipped past McLaughlin at the start, and held his lead for the rest of the race.

Seven laps from the end, a safety car slowed things down and put Mostert’s lead in jeopardy, but he pulled away swiftly at the restart and finished a winner just over half a second ahead of McLaughlin. Mostert also finished second on Saturday, but Sunday’s win was only his second victory in the 2017 season.

The Victorian appears to be making a late comeback after a mediocre start to the season, but he’s still fifth on the ladder and more than 350 points behind McLaughlin. With only 10 races left in the 2017 Supercars Championship, it will take a very optimistic punter to back Mostert at $41.00 for an outright win.

McLaughlin finished the weekend on 1,896 points, 129 points ahead of Whincup. The Kiwi’s odds of winning the drivers’ championship have shortened even further, to $1.35.