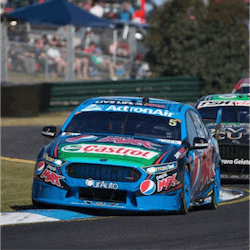 New Zealander Scott McLaughlin is the favourite at $3.50 to win either of the two Ipswich SuperSprint races this Saturday and Sunday. Unless he has a disastrous weekend, it’s unlikely his futures odds to win the 2017 Supercars Championship will be going in any direction except down.

The DJR Team Penske driver has won five races out of 14 this season, along with four second places. He is top of the drivers’ ladder and the main reason team Penske are atop the teams’ championship with 3,093 points.

McLaughlin is currently at $2.30 in the futures betting to take the 2017 title. If he succeeds, it will be his first Virgin Australia Supercars Championship, to go with the SuperTourers Championship he won in 2012.

McLaughlin has no room for complacency, however. Triple Eight Race Engineering’s Jamie Whincup is only six points behind him, and the Melbournian holds the record of six Supercars titles: four of them consecutively from 2011 to 2014. He finished in second last year, 200 points behind his New Zealand Triple Eight teammate Shane van Gisbergen.

Coulthard and Three Other Contenders

Between the two Triple Eight stars in third on the ladder is another New Zealand racer, Team Penske’s Fabian Coulthard. He started the season strongly, and before the last Supercars meeting at the Watpac Townsville 400 three weeks ago, he was leading the championship.

Two abysmal races saw him unseated by McLaughlin and Whincup, but he is still third favourite in the outright futures betting, at $5.00 to win the championship. For Saturday’s race, he is also at $5.00, behind McLaughlin, van Gisbergen and Whincup in the betting.

Then there’s Chaz Mostert, driving for Rod Nash Racing, Prodrive’s Mark Winterbottom, and Triple Eight’s Craig Lowndes. All three Aussies are long shots in the Supercars futures betting, at $67.00 for Mostert and the other two on $151.00, but they could mount serious challenges this weekend.

Mostert is having his best Supercars season since his first in 2013, while Lowndes has won six times at the Ipswich SuperSprint, closely followed by Winterbottom on four victories. Their odds this weekend are $9.00, $17.00 and $21.00, respectively.