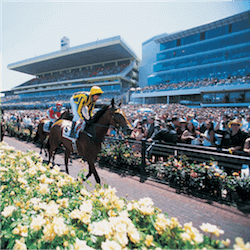 It’s Memsie Stakes Day at Caulfield on 2 September, and the highlight of the meeting is sure to be the titular Group 1 Memsie Stakes over 1400m, for prize money totalling $1-million. It’s a weight-for-age race open to horses three years old and older, and dates all the way back to 1899.

Last year, Black Heart Bart added the race to his impressive record, and the Memsie has also been won by great names like Atlantic Jewel in 2013, the year the race achieved Gr. 1 status, So You Think in 2010, Weekend Hussler in 2008, and Makybe Diva in 2005.

Nominations for the 2017 Memsie Stakes should be finalised by Sunday, so betting enthusiasts will have a clearer idea of the options next week.

There are three other races punters will be paying attention to at Caulfield next Saturday, all of them sprints run under set weights and penalties. The 1200m Gr. 3 HDF McNeil Stakes has been testing promising 3-year-olds since 1989. It offers a purse of $150,000, and racing fans will be hoping it unearths a future champion. Last year, it proved the highlight of the 2016-17 season for Snowden brothers-trained colt Defcon. He took a convincing win at the McNeil, although disappointingly, it proved his final first place of the year.

The 1200m WW Cockram Stakes, a Gr. 3 race too, is restricted to mares four years old or older, so it is likely to feature some impressive track records in its field. Like the HDF McNeil, it carries a purse of $150,000. The 2016 race was won by Ocean Embers.

The Heath 1100 Stakes, also for horses four years old or older but with no restrictions on sex, is the third of the $150,000 Gr. 3 races to look out for on Memsie Stakes Day. It’s run over 1100m, and punters can expect to see horses that do well at The Heath back at Caulfield for the Bobby Lewis Quality later in the month.