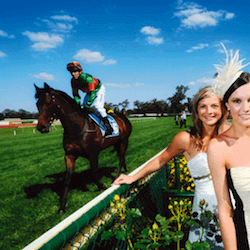 Spring racing always provides plenty of action for Australian sports betting enthusiasts, and this Saturday is no exception. Sydney’s Spring Racing Carnival continues at Rosehill Gardens, with four races that should feature prominently in the betting.

Saturday is designated Run to the Rose Day at Rosehill, named after the Group 2 feature race for 3-year-olds at set weights and penalties. The Run to the Rose is a 1200m sprint that saw its purse boosted to $200,000 when it achieved Gr. 2 status.

The Theo Marks Stakes should be one of Saturday’s Rosehill sprint highlights. It’s a Gr. 2 Quality Handicap, run over 1300m for prize money of $200,000.

Of course, as the name implies, Saturday is really a build-up for Rosehill’s biggest event of the month in two week’s time: Golden Rose Day on 23 September. The feature race, the $1-million Golden Rose Stakes, is a Gr. 1 race at set weights for 3-year-olds over 1400m, and it’s likely to attract a quality field to entertain punters.

Betting fans will switch their focus to Melbourne next week, for Makybe Diva Stakes Day at Flemington on 16 September, branded as Sofitel Girls’ Day Out this year, with the theme of Hats and High Tea. The eponymous Makybe Diva Stakes will be the highlight: a Gr. 1 weight-for-age race over 1600m, with a purse of $750,000. Online, you’ll find great betting odds at Luxbet.