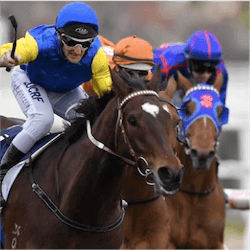 Get ready for the Memsie Stakes 2017

The 2017 Memsie Stakes is a Group 1 weight-forage race for all horses. It is held over 1 400 metres at the Caulfield Racecourse, and the total prize winner for the first place is a cool $1 million, with this total being doubled since last year. The Memsie stake last took place on Saturday the 27th of August, and Black Heart Bart beat the contenders and flew to first place.

The Favourites to Win the Memsie Stakes

Stablemates Jon Snow and Bonneval are likely to treat the 2017 Memsie Stakes as their spring kick-off, and are being viewed as the most likely contenders for the top prize.

These two horses handed the partnership from New Zealand, Murray Baker and Andrew Forsman, a very unusual achievement as their trainers, in the form of wins at the Australian Derby, by Jon Snow, and the Australian Oaks, by Bonneval, during Sydney’s autumn carnival.

Both trainers are very pleased with the strength that the animals are showing right now, and look forward to the race, set for the 2nd of September 2017.

Black Heart Bart will be Defending His Title

Black Heart Bart, trained by Darren Weir, was the winner of the Memsie Stakes 2016, and joins the ranks of past winners which include Rubiton, Miss Finland, Boban, El Segundo, and So You Think. There are hopes that Black Heart Bart joins the list of those who have managed to win this race multiple times, like Sunline, who won twice, Ajax, who took the title three times, and Lord, who went undefeated for four consecutive years, from 1958 – 1961.

Black Heart Bart is a five-time winner of the Group 1, and is looking good in terms of his title-defence at this year’s Memsie Stakes. The previously Perth-raced champ has been in top form since he joined the Weir Stables in Victoria in 2015.

Speed and Fitness Seem to Prevail

The Memsie Stakes race is frequently used as an introduction for good horses that are being prepared for the longer feature races like the Caulfield and Melbourne Cups and the Cox Plate. These horses will generally be competing against animals that are a lot less glamorous, but are most often fitter, sprinter-miles who are trained specifically or the Memsie Stakes. This race seems to have swiftness and vigour prevailing over any considerations of class around 50% of the time.