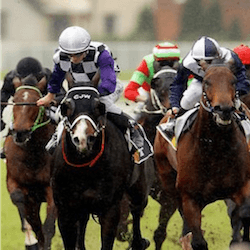 Winter racing is barely over, and Australian punters are gearing up for the Sydney Spring Carnival. The Group 2 Missile Stakes, to be run for a purse of $175,000 over 1200m at Randwick this Saturday, is the first black type race of the new season.

A weight-for-age race for three-year-olds and older, the Missile also usually gives racing fans a look at the best winter sprinters pitted against established winners that have been rested. It can be relied upon to identify some sprint stars to watch for the rest of the season.

Returning 2016 Missile Stakes winner Tycoon Tara, a 7-year-old mare in trainers Peter and Paul Snowden’s stable, is at $4.80 to win the race again on Saturday. She has a career record of 32: 10-3-2, but hasn’t raced since 24 June, when she won at Doomben in the 1350m Group 1 Tattersall’s Tiara. She will be carrying 56.5kg and starting from a prime Barrier 1 draw on Saturday.

Le Romain, a 5-year-old gelding with a career record of 18: 6-8-1, is the $2.20 favourite for the Missile, despite a draw in Barrier 8. Along with five other horses, he carries the top weight of 58.5kg on Saturday, but he was carrying 59kg when placed second in his last race: Randwick’s 1400m Group 1 Schweppes All Aged Stakes in April.

Invincible Gem, Le Romain’s stablemate under trainer Kris Lees, could be a good bet at the Missile; she’s the fourth favourite at $9.50. The 4-year-old filly will be carrying 56.5kg and jumping off from Barrier 6, and she should be raring to go after resting since March’s Group 1 Randwick Guineas.

Odds for The Rest

Two other horses that could be strong contenders in the Missile Stakes are Jungle Edge at $5.50, and The Monstar at $9.00. Their respective draws at Barriers 4 and 5 could well count in their favour.