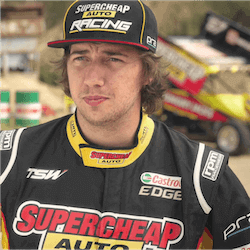 Before the Ipswich SuperSprint races last month, Rod Nash Racing’s Chaz Mostert was being offered at around $41.00 in futures betting for the 2017 Virgin Australia Supercars Championship. His win in Race 16 at Ipswich’s Queensland Raceway has seen his price shift. Punters can now get odds of around $33.00 on Mostert winning the drivers’ championship, with outliers at $28.00 and $50.00.

Anyone convinced by Mostert’s Race 16 performance that he can haul in ladder leader and Ipswich Race 15 winner Scott McLaughlin, currently 351 points ahead of him, should grab those $50.00 odds while they still can. If Mostert continues his winning streak at the Sydney SuperSprint races on 19-20 August, his odds are likely to shorten even further.

Most punters believe Mostert is a huge long shot at this point, though. There are only 10 races left in the season, two of them endurance events, and Mostert is still fifth on the ladder behind McLaughlin, Jamie Whincup, Fabian Coulthard and Shane van Gisbergen.

McLaughlin and Coulthard have also put DJR Team Penske into the lead in the teams’ championship, with a combined points lead of 192 over Triple Eight Race Engineering’s Whincup and van Gisbergen. Sitting on 1,896 individual points, 129 ahead of Whincup, McLaughlin’s six wins and five second places this season have made him the odds-on favourite to hang onto the top spot, at around $0.80.

Whincup has only one win to his name this season, but six seconds, three thirds and two fourths have helped keep him in the running. He is being offered at between $2.25 and $2.75 to top the driver’s ladder, where he currently has 1,767 points.

Given that a Supercars win nets a driver 150 points, and decreasing points values are awarded all the way down to 26th place, it’s quite possible that Mostert could jostle his way into the Top 4 in the final 10 races. However, his unseating McLaughlin to win the championship would require an unlikely string of remarkable upsets.