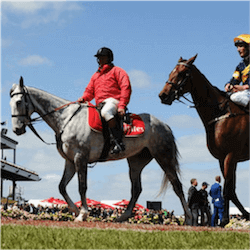 The first race of the day had two debutants who showed an impressive run behind the winner Aloisia. Third placed, Grunt was slow off the start but had the fastest time over the last 200m. Sixth place Ruchla also had peaks traveling well on the straights. Indernile didn’t get going properly but had a similar speed to the winner. Meanwhile Salsamor was perhaps the best beaten horse, having a higher average race speed than the winner. But it was Aloisa whose turn of foot took led to the win.

Overstep got off the mark quickly along with leaders Mowtown Lil and Diving Quality. It all fell to jockey Craig Newitt to hold a perfect ride on Overstep, ensuring no loss of momentum and finding the right gap. Miss Siska picked up fourth with Summer Glen running in sixth. Both are set for further placing, considering they were the best of the bunch outside the trifecta.

The two run-ons in the race were Granddukeoftuscany who picked up fifth and Jimivag in sixth. They were the only two horses to break 12seconds in the final furlong. The major difference was that the Robert Hickmott galloper got an extra 9 meters compared to the winner. Visually Shoreham came in for third but the closing stages were still slower than the winner.

All honours must go to the race winner Guangzhou. Covering the most ground than all the other gallopers in the race, with a superior speed, it was Guangzhou who dominated from start to finish. The next quickest was Bettyrae Ruby taking second place with a great speed over the last four furlongs. An impressive late run from The Passage brought in a bit of pace, being the only horse to break the 12 second mark in the final furlong.

Sovereign Nation had a slow start but was dominant in the finish. Runner up Well Sprung was beaten by 1.25 of a length but managed to match the winners average speed.

Mujadale led the race at the start, doing all the work. But it was De Little Engine’s performance in the final furlongs that proved to be the defining factor. Like a Carousel travelled well for third, he had a chance for second though, having a lead on Mujadale in the straight.

The numbers on this one tell us that the quinella could have been completely reversed. Portion Control picked second despite clocking a faster speed than the winner Zourkhan. That being said, Newitt rode her well, saving ground on her rivals to Salute for the race.