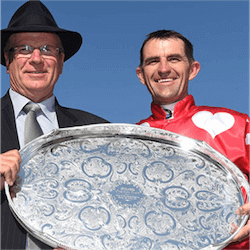 February 25 brings Australian racing fans the middle leg of the Group 1 sprint series in the Melbourne Autumn Carnival, and the only one run at Caulfield: the 1100m Oakleigh Plate. It’s one of three prestigious races punters will be betting on at Blue Diamond Stakes Day, along with the day’s eponymous main race over 1200m, and the 1400m Futurity Stakes.

When the final draw is announced, betting enthusiasts may want to check the odds on Hellbent, a 4-year-old entire now trained by Darren Weir, after starting out in 2015 under Kurt Goldman. He quickly shot to prominence in minor sprints, before a third place at Randwick’s Brian Crowley Stakes turned him into a black type contender, followed by his first major win at Flemington’s Inglis Dash.

His form fell off towards the end of 2015, however. The trainer switch seemed to do the trick, though: Hellbent won three of his first five starts for Weir last spring. If Weir sticks to his current plan, and the 4-year-old remains in the Oakleigh Plate draw, he will be one to watch, following his third place in the 1000m Kensington Stakes at Flemington in January.

Trainer Matt Dale has yet to confirm if 5-year-old gelding Fell Swoop will run next at the Lightning Stakes at Flemington on February 18, or Caulfield’s Oakleigh Plate a week later. Last year, he finished runner-up to Flamberge in the Caulfield sprint, and if he does run in the Oakleigh Plate again this year, it will be interesting to see if he can convert a consistent 2016 season of finishes in the top six into more wins.

Another contender for the $500,000 Oakleigh Plate purse that may be worth a punt is Faatinah. Regan Bayliss, now enjoying full jockey status after his early release from his apprenticeship, will ride the 4-year-old gelding, who has impressed with three successive wins in as many starts since resuming. He’ll be showing his form again on February 04, in Caulfield’s WJ Adams Stakes over 1000m.