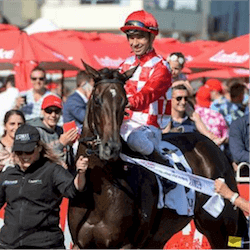 Blue Diamond Stakes Day at Caulfield is always a major draw-card on the Melbourne racing calendar, with three Group 1 races to keep the punters entertained. Last Saturday proved no exception, with thousands turning out to watch filly Catchy win the $1.5 million Ladbrokes Blue Diamond Stakes over 1200m for two-year-olds.

Catchy was the second favourite after the colt Pariah, who finished second after Catchy came storming through from 12th place to make up six lengths. Formality ran third. Earlier in the day, 6-year-old Black Heart Bart lived up to his favourite status in the Group 1 Italktravel Futurity Stakes over 1400m, winning by a nose to leave stablemate Tosen Stardom second.

However, it was the shortest sprint of the day, and also the second-to-last-race on the card, that provided Saturday’s Group 1 upset: the $500,000 Resimax Group Oakleigh Plate over 1100m.

From a long run out the Caulfield chute, the Oakleigh Plate goes into just one turn, before a final straight to the finish. It’s a flat-out sprint, and 5-year-old mare Sheidel led the field from the start of Saturday’s race.

Priced at $8.00, Sheidel hadn’t been considered by many tipsters for the Oakleigh Plate. Most of the attention was on 3-year-old colt Extreme Choice, 4-year-old entire Hellbent and 5-year-old gelding Fell Swoop, who at one point in the ante-post betting were first, second and third favourites respectively.

However, the mare led the race from the start, only briefly ceding the top spot to stablemate Faatinah on the turn. But she surged back to win by a length, with 4-year-old gelding Faatinah hanging on to take second place from Extreme Choice by a nose.

Sheidel’s next race is likely to be the 1200m Lexus Newmarket Handicap at Flemington on March 11. Extreme Choice, Hellbent and Fell Swoop are also among the nominees that could make the final field, so this looks set to be another sprint that Australian punters will want to have a bet on.